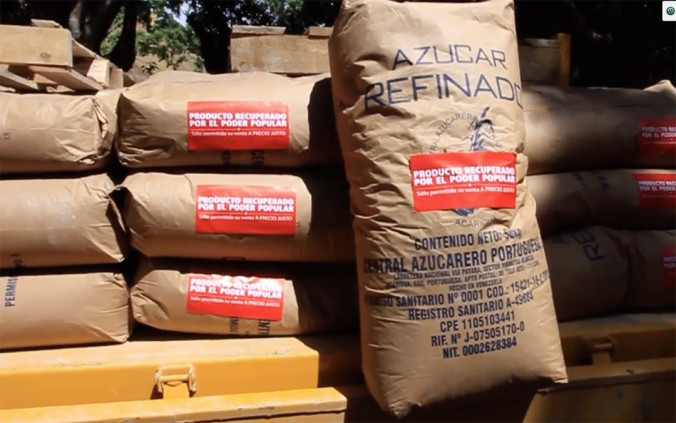 This week, leaders of major Latin American blocs denounced Washington’s latest hostilities against Venezuela. Foreign ministers of the Union of South American Nations (UNASUR) met February 9 and declared that the new round of U.S. sanctions against the Bolivarian government “violate the principle of non-intervention in the internal affairs of other States.”

The sanctions — a ban on U.S. travel for certain Venezuelan leaders — come in the midst of a year-long economic war by capitalist opponents in Venezuela conspiring against the revolution, as well as violent attacks by right-wing organizations, known as “guarimbas,” in which 43 people have been killed.

The member states of the Bolivarian Alternative for the Americas (ALBA) issued a declaration on February 10, saying, “The new sanctions against the Venezuelan people and government – framed on the excuse of human rights – hide the true intentions to destabilize the Bolivarian Government, to overthrow or change its political regime that is freely chosen by the people.”

Already, the 33 nations of the Community of Latin American and Caribbean States (CELAC) have denounced the U.S. measures in their January summit in Costa Rica. The latest aggression has its roots in events beginning February 2014, when President Nicolás Maduro’s government adopted firm measures to combat the opposition’s economic sabotage and violence. The population was being buffeted by extraordinary mark-ups in prices of consumer goods, as high as 5,000 percent, and massive corporate hoarding of basic consumer goods, intended to create chaos and instability.

In February and November 2014, backed by the National Assembly, Maduro signed dozens of measures – “enabling laws” – to crack down on sky-high profiteering and corporate hoarding. In February 2014, rightwing forces launched violent attacks throughout Venezuela, burning government buildings, Metro stations and killing dozens of civilians. Counterrevolutionary leaders – among them Maria Corina Machado, Leopoldo López and Henrique Capriles – called for open street battles against the government. López is currently in jail awaiting trial for his actions.

Now, a renewed and more intense economic sabotage is underway by the capitalist elite to create anger among the population, in the hopes of stirring anti-government sentiment and more violence. An astounding amount of consumer goods is being hoarded by corporate plotters, which has led to empty shelves, enormous lines and great discontent.

Government and people fight back

To bring the goods out of the stockpiled warehouses and restore confidence and calm in the people through fair distribution of necessities, a major campaign is being inaugurated this month: “The Popular and Military Commandos Against the Economic War.” By mobilizing the communal councils in the neighborhoods, together with the government apparatus of the relevant ministries and National Guard, etc., the Commandos are helping organize to sell the recovered goods in an orderly manner, and to keep vigilant against further sabotage.

There is a great deal for the Commandos to take on. In just one operation in mid-January, Venezuelan Vice-president Jorge Arreaza announced that the Herrera corporation had hidden away 88 tons of corn flour, 90,000 pounds of rice, more than 1.5 million disposable diapers, 800,000 pounds of detergent, in addition to soap, milk, razors, etc. The goods were recovered in San Francisco, Zulia state, less than 100 miles away from the Colombian border, where Arreaza accused Herrera’s owners of plotting to sell the products there, where they would yield a much higher profit than in Venezuela.

Andres Eloy Mendez, Superintendent of Fair Prices in the government, said the companies “want to generate the idea that there are no products. Here they are. This company has nine storehouses in nine states. As of today they are occupied and the merchandise will be distributed to the people. The law provides for 10 to 12 years of jail and confiscation of the goods….”

Speaking to a crowd in Miranda state, Arreaza said the Commandos are “not just another structure. It will be the fundamental instrument to defeat the Economic War in 2015.” In another major rescue of goods, February 5 in Caracas, more than 200 tons of milk, sugar, chicken and cheese were rescued from speculators. Executives of the national chain Dia a Dia and the national drugstore chain Farmatodo have been detained for investigation because they declared a lack of inventory but their warehouses are stashed full of products.

The U.S. government is making outrageous accusations against the Bolivarian leadership, slapping sanctions on government leaders, and giving refuge to Venezuelan counterrevolutionaries in Miami who are building a base of operations, just like the Cuban right-wing terrorists the U.S. has sheltered there for decades.

In the meantime, the threats of violence inside Venezuela against the Revolution remain a danger. A fascist former Venezuelan military general, Angel Vivas, is exhorting the opposition forces to arm themselves for a “war to the death,” against “Castro Communism.” He is notorious for having called on the opposition to tie wire across streets when fascist violence broke out last February. A number of people on motorcycle were decapitated.

That is the reason Leopoldo López is in jail. He actively called for violence in the streets to take down the government. Washington has its U.S. right-wing allies rallying support for López. Former presidents Andrés Pastrana of Colombia, Felipe Calderón of Mexico and Sebastián Piñera de Chile attempted to visit López in Ramoverde jail on January 24, demanding his freedom.

President Maduro blasted the three former presidents, accusing them of trying to encourage a coup. He told a mass rally, “Calderon left a country in flames … the very people of Mexico repudiates him, he is a man linked to narco-traffickers, killers of the extreme right…”

The economic and political challenges that Venezuela’s revolutionary government faces are great. They are compounded of course by the dramatic drop in oil prices, caused in part by Saudi Arabia’s persistent overproduction of oil. More than 90 percent of Venezuela’s income derives from oil exports. On national television Tuesday night, President Maduro stated that the social and economic missions will remain but that the people must prepare for the possibility that oil prices could remain low for at least two years.

It is of the greatest urgency that progressive forces worldwide defend Venezuela’s Bolivarian Revolution and the people’s right to be free of U.S. threats and interference. This coming March 5, actions are planned in several United States cities, including Washington DC, Los Angeles, San Francisco, New York,  and elsewhere, on the second anniversary of Hugo Chavez’s death, to support Venezuela’s revolution.