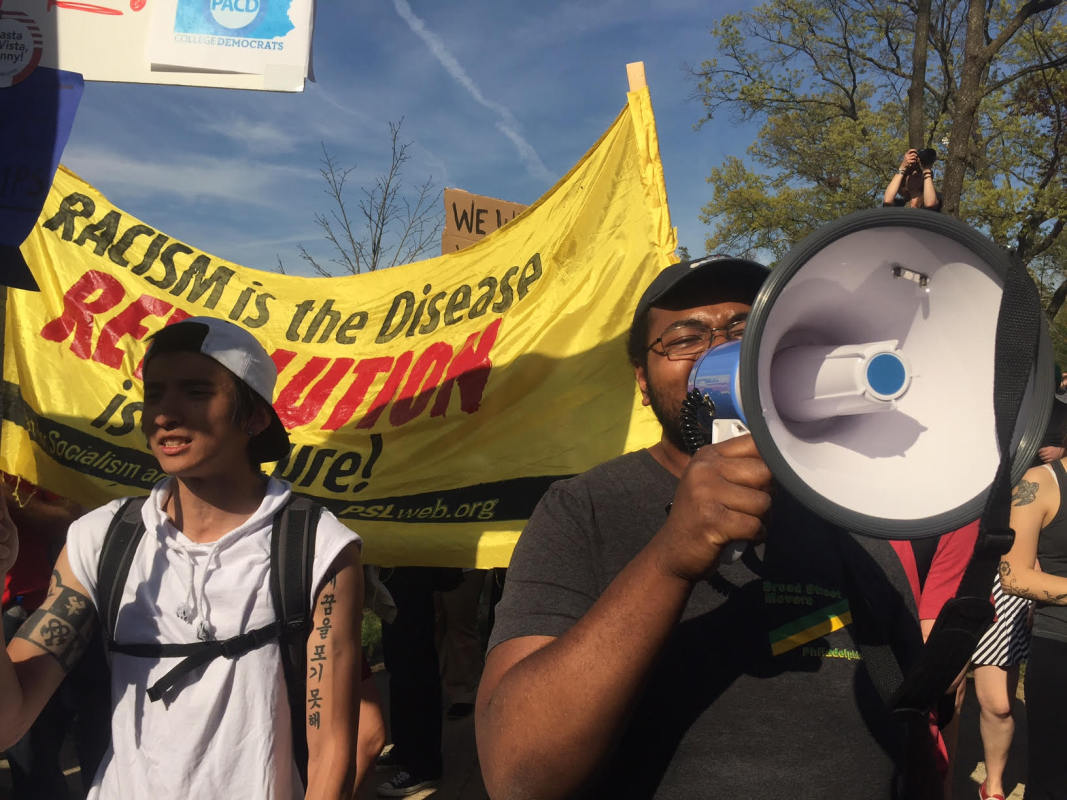 When Donald Trump’s bigoted campaign announced that they were holding a rally at West Chester University on April 25, students, faculty, and community members immediately sprang into action. Together, they sustained a spirited protest against Trump and his supporters for over eight hours, with attendance swelling to over 500 during the action’s peak.

Trump undoubtedly held the rally in the suburb of West Chester because he is too terrified to step foot in the nearby city of Philadelphia.

West Chester University of Pennsylvania—a state-run institution—announced via e-mail on the night of Friday, April 22 that the administration had agreed to let Trump hold a “rally” the following school day, April 25. Within hours, an online petition demanding that the university cancel the event had gained traction. In addition to a small group of faculty, other groups held emergency meetings.

People flooded the administration’s inboxes with messages pleading for them to cancel the event. The administration, which did not consult the campus community before making their decision, refused to budge. They sent out several empty e-mails with platitudes about the importance of “free speech” and the “free exchange of ideas.” Trump’s speech, of course, is not free; it comes directly at the expense of oppressed people. Without even a hint of irony, the university interim president pleaded for “those who plan to protest to do so in accordance with the principals of civility that are a fundamental value of West Chester University.” Trump and his supporters were not given this requirement.

Protesters began assembling at 9:00 a.m. on the day of Trump’s rally. Students hung protest banners outside of the Student Center, which was directly behind the protest site. Meanwhile, buses of supporters funded by the Trump campaign began trickling in, as did the cops and Secret Service. Protesters were cordoned off to a strip of grass across from the rally location. Unfortunately, the auditorium’s capacity of 3,500 people was met.

Although Trump claimed that there were 9,000 people outside waiting to get in, the number was more like 200. Those 200 obnoxious, entitled, and bigoted Trump supporters battled with protesters who had shown up for a variety of reasons.

Mike Peterman, a WCU senior and veteran of the Afghanistan war told Liberation News, “I’m here because I have seen enough hate. This isn’t the place for it. We already have race issues on the campus and this is making it worse.”

“Look at all the people with American flags,” he added. “It is the same type of hate as military hate. Military hate is based on racism and the dehumanization of the other, just like Trump’s hate.”

Emmett Henry, a West Chester community member, cited his opposition to Trump’s bigotry as inspiration: “It’s ridiculous to ban anyone from the country based upon either ethnicity or religion,” he said.

Many students echoed Henry’s disgust with bigotry and were proud of the turnout. Alyssa Delorenzio, a WCU senior, said, “To see all these students here is absolutely amazing.”

The vast majority of people with whom Liberation News spoke mentioned Trump’s proposal to build a wall between the U.S. and Mexico as a particularly odious feature of his campaign. Christopher Thornton, a WCU alum and member of the Party for Socialism and Liberation, led protesters in chants of “Say it loud, say it clear, immigrants are welcome here!” and “Racist, sexist, anti-gay, Donald Trump go away!” throughout the event.

While Trump’s ascendance signals the dangerous rise of a right-wing populist movement in the U.S., this is clearly accompanied by the emergence of a broad-based fight-back movement. The protest at WCU was the latest expression of this movement.