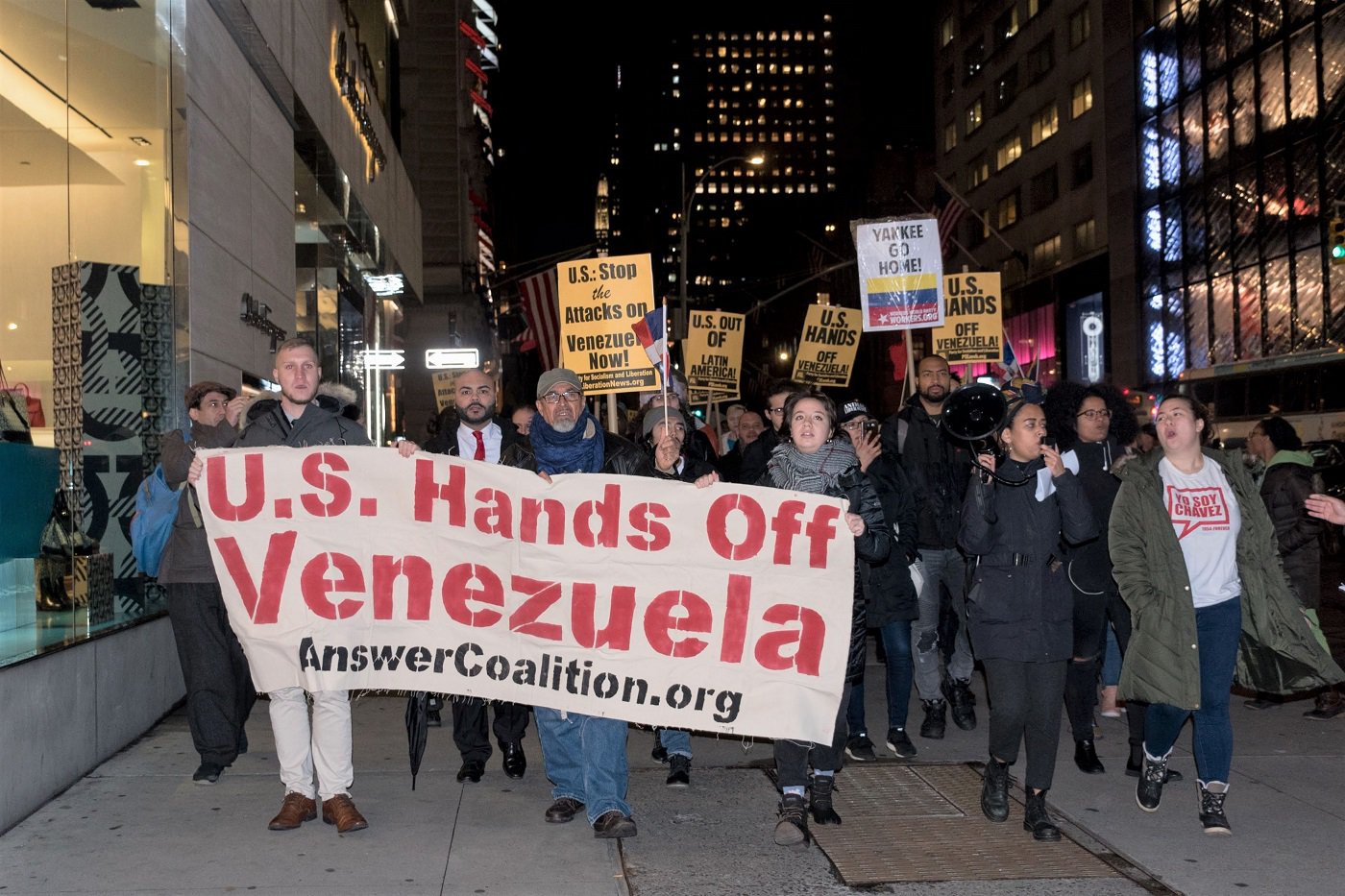 On December 6, Venezuela will hold parliamentary elections to choose new deputies for the National Assembly, the country’s legislature. With heightened U.S. attacks in Venezuela, including a tightening economic blockade, the elections are of great consequence to the future of the country.

In the last legislative election held in 2015, the governing United Socialist Party of Venezuela (PSUV) lost a majority of seats in the National Assembly to a coalition of right-wing parties called the Democratic Unity Roundtable (MUD). This shift allowed the opposition to heighten its efforts to destabilize Venezuela and promote U.S. intervention.

Central to this destabilization campaign has been the claim that the country’s democratic processes are fraudulent, and that the elected president Nicolás Maduro is a “dictator”. However, ever since the Bolivarian Revolution began, after the election of Hugo Chavez as president in 1998, Venezuela has strictly adhered to constitutional principles and a fair and transparent electoral process.

Venezuela’s electoral authority -- the National Electoral Council (CNE) -- is one of five co-equal branches of the country’s government. It presides over one of the most technologically advanced and transparent electoral systems in the world. Former U.S. president Jimmy Carter famously remarked “[...] of the 92 elections that we've monitored, I would say the election process in Venezuela is the best in the world.”

Venezuela has an electronic voting system where an individual's ID card and fingerprints are used to determine their identity to prevent double voting. The system then prints a paper ballot confirmation that can be verified by the voter and placed in the ballot box. The voter then signs and leaves a physical fingerprint in a record book at the center they are voting at. This makes any attempt of fraud during elections extremely difficult.

Nevertheless, right-wing parties supported by the U.S. government and its junior partners have made numerous attempts to overthrow the Bolivarian revolution. This includes delegitimizing the country’s core institutions of government and creating widespread chaos.

The MUD’s breakthrough at the National Assembly in 2015 put the right wing in a position to promote and support deadly riots in 2017 that took the lives of scores of supporters of the revolution as well as innocent bystanders. This violence often had a racist character. In one infamous example, Orlando Figuera, a young Black Venezuelan supporter of the government, died after being burned alive by a counter-revolutionary mob.

To reestablish order and give the revolutionary government a fresh mandate to move forward, President Maduro invoked Article 347 of the Venezuelan constitution to convene a body known as the National Constituent Assembly (ANC). The Constituent Assembly is a temporary, elected body with the power to modify or rewrite the country’s constitution. The ANC also holds superseding authority to pass laws while it is in session. The National Assembly at the time was being held in contempt of the Supreme Court after the opposition insisted on seating deputies whose elections were challenged because of vote-buying, so the ANC also served the purpose of giving the country a functioning legislative branch capable of dealing with its profound challenges.

The MUD boycotted the 2017 National Constituent Assembly elections. However, over eight million Venezuelans defied the violent boycott and turned out to vote. This show of support took the momentum out of the opposition riots, which soon fizzled out.

The country then entered a period where there were two competing legislative bodies -- the National Assembly representing the old elite backed by U.S. imperialism, and the Constituent Assembly representing the interests of the working class fighting to build socialism. The National Assembly would then go on to serve as the launch pad for the ludicrous declaration by failed coup leader Juan Guaidó that he, and not Maduro, was the country’s legitimate president.

The significance of this year’s election

The December 6 election has the potential to end this constitutional crisis provoked by the counter-revolution by retaking the National Assembly for the Bolivarian Revolution. It is being held In the midst of the Covid-19 pandemic and crippling economic sanctions imposed by the United States that has left the Venezuelan people in a profound economic crisis, particularly the most vulnerable working class sectors.

The coalition of anti-Chavista parties referred to as “G4'', which includes Guaidó’s Popular Will party, Justice First, Democratic Action and A New Era have decided to boycott the elections. However, sectors of the opposition have decided to participate in the election, including factions of the G4 parties, further splitting the counter-revolution.

Nevertheless, Juan Guaidó and his allies have declared the process “illegitimate” and lacking transparency. Spain has asked Venezuela to offer “democratic guarantees'' to be able to back the electoral process. The European Union has ruled out sending observers to Venezuela in December.

Over the years, the right-wing elite class in Venezuela with support of the United States, its partners in the “Lima group” regional alliance of right wing governments, and the Organization of American States have tirelessly attempted to subvert nearly every democratic election Venezuela has held. Their attempted coups and economic sanctions continuously fail to overturn the revolution due to the people’s consciousness and determination to defend their country’s independence. The rhetoric from the right-wing which declares any elections in Venezuela as “undemocratic” ignores this long history of adherence to constitutional principles and participatory democracy led by the working class grassroots.