Widespread media coverage of protest on Opening Day of Trump Hotel in D.C. 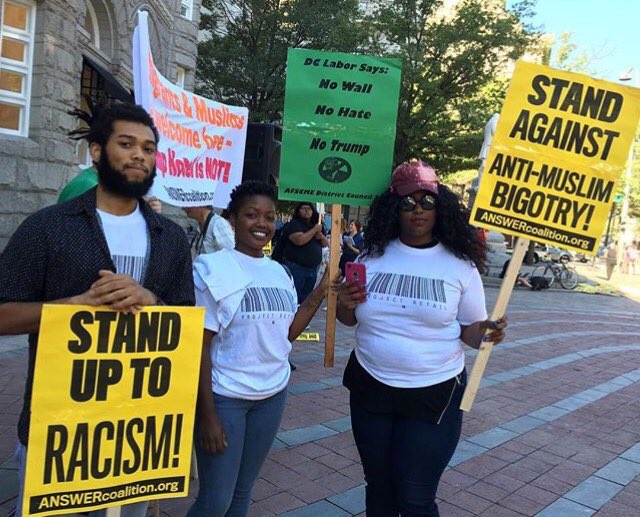 The Sept. 12 protest initiated by the ANSWER Coalition and endorsed by many progressive organizations and unions received widespread coverage in the local, national and international media. Below are a few articles quoting ANSWER Coalition organizers.

Click here to read a report and view photos and video from the demonstration.

At the same time, two dozen protesters amassed outside the hotel’s soaring arches with signs declaring, “Immigrants & Muslims are welcome here — Trump hotel is NOT!” Yasmina Mrabet, of the advocacy group Act Now to Stop War and End Racism, said the hotel marked another example of what the “billionaire class represents, which is the reaping of profits at the expense of hardworking people.”

But back outside in the afternoon humidity, restful was not the mood. Radhika Miller, 36, a lawyer and protest organiser for the Answer Coalition, said: “As if it wasn’t despicable enough that Trump built a high-rise commercial tower, he’s now taken over a historic federal building. Trump actually gets a chunk of Pennsylvania Avenue.”

The avenue has hosted countless processions, funeral corteges and protest marches, including those by women demanding the right to vote. Miller added: “This is a historic route, and for Trump to take it over through wheeling and dealing behind closed doors is disgusting. We don’t want his name emblazoned on Pennsylvania Avenue.

"Racism, bigotry, and divisiveness has to end," said Eugene Puryear, with the Answer Coalition. He joined others in demonstrating Monday morning.

The Answer Coalition, short for Act Now to Stop War and Racism organized the all-day demonstration outside the hotel, whose grand opening has been pushed to October. ...

"The people of D.C. and the people of the country say no to Trump's rhetoric and policies of racism, of fear mongering and scapegoating against immigrants, the Muslim community, refugees," protest organizer Sarah Sloan said.

Another target of the protest, Sloan added, is the "sweetheart, 60-year lease" that federal agencies gave Trump to build the super luxury hotel at the old Post Office Pavilion. ...

"The federal government worked to hand this property, that's public property, over to him, and they've even handed portions of this plaza," Sloan said.

"We are opposing of course this handover of public property to a private organization run by a racist, right-wing billionaire," she added.

The protesters who gathered outside the hotel Monday don’t share that enthusiasm. But it’ll take more than demonstrations to affect the hotel’s bottom line. Whether the venture succeeds, and by how much, hinges more on how well-to-do travelers decide to spend money. “None of us can afford to boycott the Trump hotel because we couldn’t afford to stay here to begin with,” Ben Becker, a protester and organizer with the anti-war ANSWER coalition, told me. ...

Still, if travelers want to experience the luxury of Trump’s hotels, they may have to contend with criticism. “It’s almost a political statement to do any type of business now with the Trump brand,” the ANSWER coalition’s Becker said outside the Washington building Monday. “If you are a millionaire, or a member of the ultra rich who can afford to stay in this hotel, then you have to be a particularly racist one at this point to book a room here,” he added. That kind of reaction could make prospective clients squeamish, and might convince the controversy-averse to stay away.