Workers and farmers fight for justice in Japan

The following was compiled from reports from Yoshio Nakamura of Asia Wide Campaign (AWC) - Japan, an anti-war organization on the front lines of the country's progressive movement. 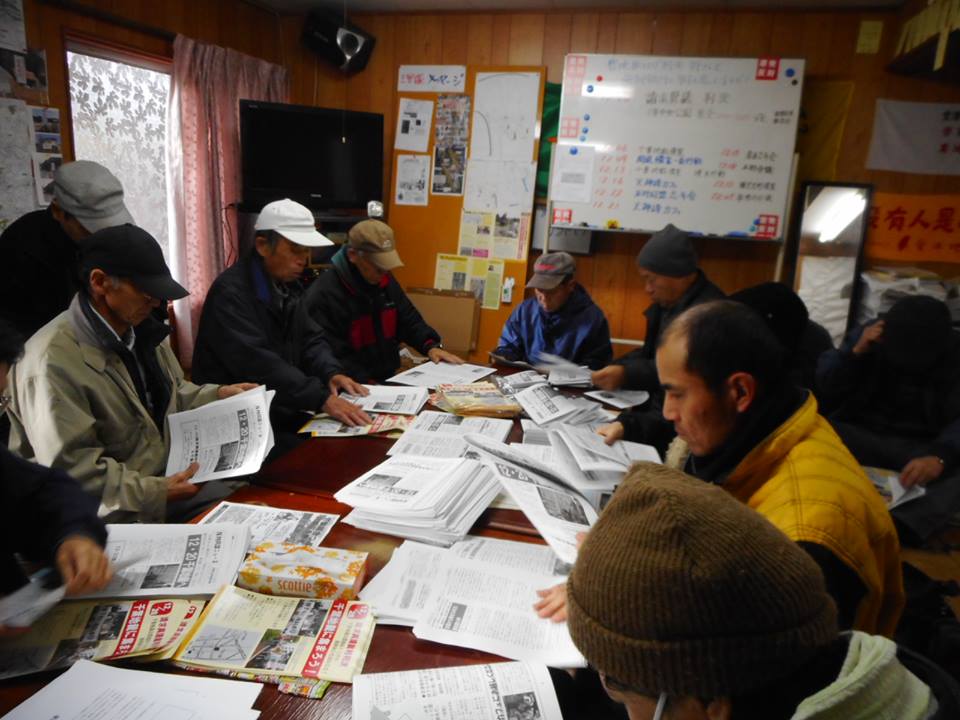 Members and supporters of the Sanrizuka-Shibayama farmers’ league against Narita airport gathered at the small annex of farmer Takao Shito’s house this morning. It was a day of delivering the league’s monthly newsletter to people who live in the neighboring area. After a short meeting, they went out to areas that they are in charge of.

Militant resistance is a tradition of the Sanrizuka-Shibayama farmers' league. Its 52 years of struggle has encouraged and given inspiration to the people’s movement. The league have already determined to steadfastly fight against land grabbing even if an unjust judgement is pronounced by the court. 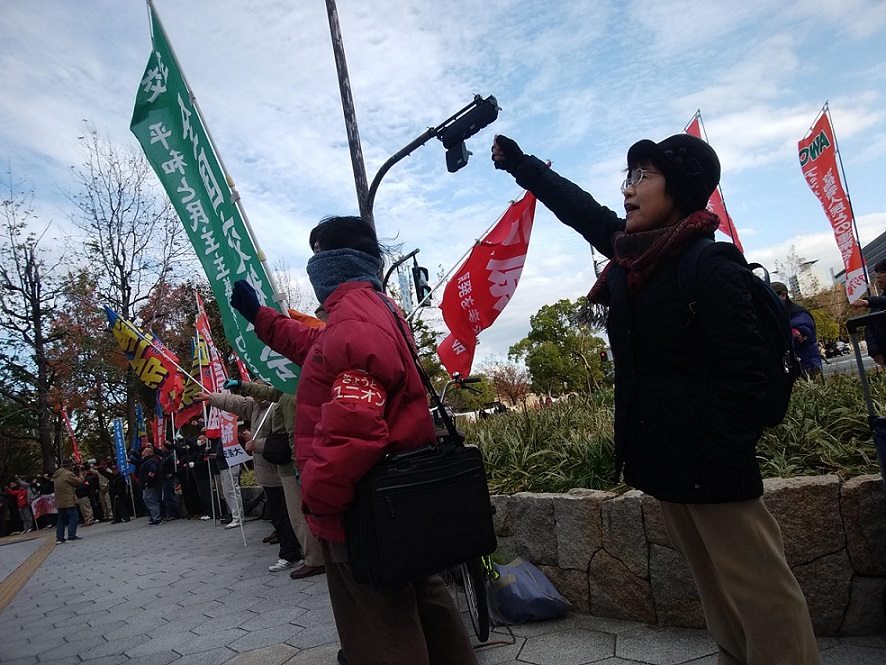 The All Japan Construction and Transport Workers Solidarity Union - Kansai Concrete Mixer Truck Driver Branch or simply the Solidarity Union - Kansai Branch is now fighting against severe state repression. Due to trumped-up charges, 31 union members were arrested just since last August. President, vice-presidents and secretary general of the union are included among those arrested. 20 union members were already released but 11 members are still detained.

Police claim that the reason for the arrests are ‘attempted extortion’ or ‘forcible obstruction of business’. Right-wing media is pushing a negative campaign against the Solidarity Union -Kansai Branch based on one-sided information from police. However, the union’s struggle, including carrying out strikes or negotiation with management, are just and legitimate activities that the Japanese constitution guarantees. Workers need to organize themselves and resist capitalists’ exploitation, oppression and plunder; and defend their lives and rights.

The Solidarity Union - Kansai Branch, which has more than 1,000 members, is one of the most militant labor unions in Japan. It has fought for workers’ lives and rights for many years. It has also pushed through ‘industrial policy struggle’ which aims at the democratization and normalization of the cement industry, resisting heavy exploitation and plunder by general contractors and cement monopolies. The union has also actively joined social campaigns against war, U.S. bases, nuclear power stations and neoliberal policies. In addition, it has promoted international solidarity campaigns with workers in other countries.

Due to such progressive activities, the Solidarity Union - Kansai Branch is now facing state-led repression. Through it, capitalists and the government also aim to shrink other labor unions and social movements.

To resist repression, large scale protest rallies were held in Osaka on December 8 and also in Tokyo on December 15. Workers in the Kansai area have also held weekly protests in front of the headquarters of Osaka prefectural police every Saturday, demanding the immediate release of detained union members, including its president.

We have received solidarity messages from our international comrades like KMU, BAYAN, MIGRANTE-Japan and Taiwan Labor Rights Association. Those were already delivered to workers in the union. Thank you for your solidarity with the struggling Solidarity Union - Kansai Branch. 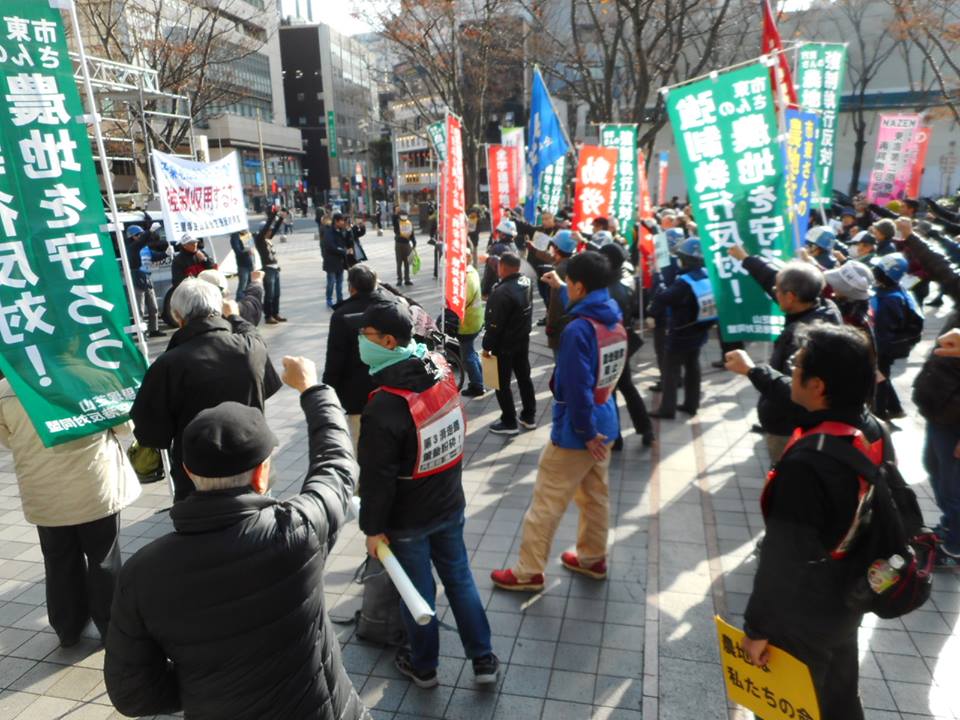 Regarding the court battle over farmer Takao Shito’s tenant lands, the Chiba Local Court pronounced an unjust decision which paves the way to compulsory execution of his lands. We vehemently denounce it.

Just after the trial, the Sanrizuka-Shibayama Farmers’ League against the Narita Airpot declared that they will immediately launch ‘24-hours sit-in’ at Tenjinmine, where farmer Shito’s lands is located, to counter compulsory execution of the lands.

Takao Shito is a member of the league. His lands have been cultivated for around 100 years since his grandfather’s generation. He has grown 50-60 kinds of vegetables for one year by organic farming methods. They has been directly delivered to around 400 families every week.

For farmers, land is life. The league and supporters have determined to steadfastly resist illegal and unjust land grabbing by the airport company and the government.

Dare to struggle and dare to win! 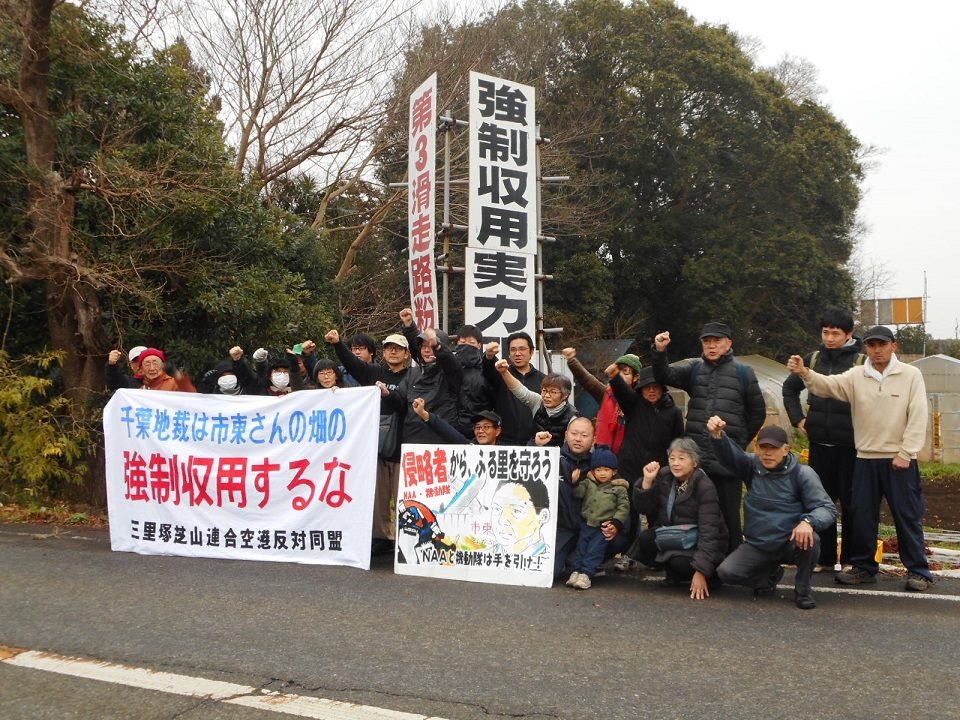 The Sanrizuka-Shibayama farmers’ league against the Narita Airport and its supporters opened the ‘Tenjinmine Cafe’ at farmer Takao Shito’s small annex. Supporters who come from outside Sanrizuka enjoyed coffee and dishes. Vegetables of dishes, of course, are from farmer Shito’s lands which are targets of land grabbing by the airport company and the government.

In the short period for rest which the farmers’ league won, the league and its supporters decided on further expansion of their common resistance against land grabbing. On this day also, farmer Shito was farming on his lands until sunset along with some supporters.