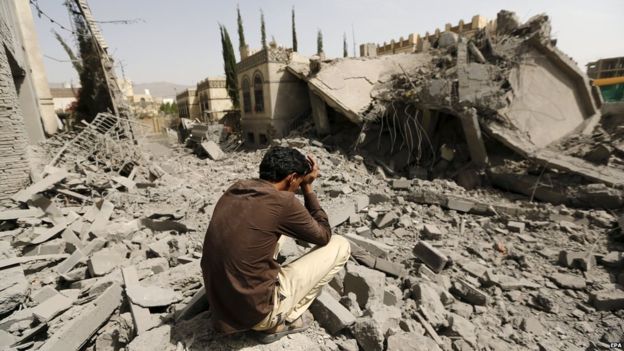 On Nov. 16, the World Food Programme, an agency of the United Nations, released a horrific estimate: If the Saudi blockade of Yemen is not lifted, 150,000 malnourished children could die in a matter of months. This unspeakable cruelty imposed by Saudi Arabia, using primarily U.S.-made weapons, and with the political and logistical support of the U.S. government, is one component of the latest offensive by the Saudi regime grouped around Crown Prince Muhammad Bin Salman. The ANSWER Coalition denounces this, as well as the Saudi decision to apparently hold captive and force the resignation of Lebanese Prime Minister Saad Hariri in a bid to destabilize that country.

While this is not the first time the Saudis imposed siege warfare as part of their war on Yemen, their move to completely cut the country off from the outside world is a significant escalation and was carried out in concert with an internal purge of Muhammad Bin Salman's perceived enemies. The Saudis justify their action by claiming it is retaliation for a missile launched from Houthi-controlled territory in northern Yemen by Iranian forces. Iran has denied these claims, and countered that this is simply a pretext for widening the Saudi struggle against Iranian allies in the pursuit of its own hegemony in the Middle East.

Meanwhile, Saad Hariri remains in Saudi Arabia under mysterious but undoubtedly coercive circumstances, but has signaled his intention to leave for France in the coming days. Hariri is no ally of Iran, but his decision to make a deal with the Lebanese resistance organization Hezbollah to form a government was seen as unacceptable.

Israel is an enthusiastic participant in the push to destabilize Lebanon. For more information about this complex situation, read this article "Secret document: Saudis, Israel working together to provoke war in Lebanon".

The U.S. government has itself been a practitioner of starvation tactics like the Saudis are now employing in Yemen -- the deaths of over 1 million Iraqis due to the genocidal sanctions imposed on the country between the Gulf War and 2003 invasion being one example. Likewise, the Trump administration has taken several belligerent moves that pose a grave threat to Iran.

The ANSWER Coalition demands that the United States and its junior partners in Saudi Arabia immediately cease their aggression in Yemen, Lebanon and everywhere else in the Middle East.