The following article was published shortly after the latest right-wing, U.S.-supported coup plot was foiled in Venezuela. Actions are being held across the country on and around March 5 in solidarity with Venezuela's Bolivarian Revolution - click here for more details. 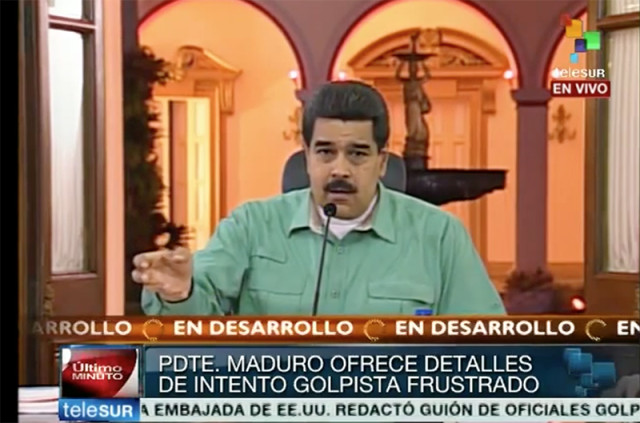 A coup plot against President Nicolas Maduro and the Bolivarian Revolution was thwarted this week as a retired Venezuelan Air Force general and 10 military and civilian opposition figures were arrested.

The bombing of the Presidential Palace, the National Assembly, Telesur TV network, the Defense Ministry and other Caracas sites was to take place February 12, the one-year anniversary of violent anti-government attacks known as “guarimbas,” which caused 43 deaths. A Tucano EMB 312 bomber would have been flown by renegade Air Force First Lieutenant José Antich Zapata to destroy the targeted sites.

U.S. spokesperson Jen Psaki and the Venezuelan far-right are dismissing the plot claim, but video evidence, a map of the bombing targets, and other key evidence have been unveiled on national television, with more details promised. Washington’s role in previous plots has been proven before.

According to President Maduro, detained coup leaders have confessed their role. He spoke on national television Sunday morning, to reveal more facts and accuse the United States government of conspiring with coup plotters.

Antich Zapata received U.S. visas for himself and other conspirators from the U.S. embassy in Caracas, for escape from Venezuela in case the plot failed.

Maduro also said that the script of an eight-minute video by the coup group – to air once the government was overthrown – was written with the help of a U.S. embassy advisor.

In obvious preparation for the failed coup, three of the most belligerent opposition figures – Maria Corina Machado, Leopoldo Lopez and Antonio Ledezma – issued a “Call for a National Transition Agreement,” on February 11, the day before the overthrow was to take place. Lopez is currently awaiting trial for his role in the violent attacks last February.

The “transition agreement” is a plan for overthrow of the Bolivarian Revolution socialist project, including a demand for felony trials of current government leaders after the “transition,” the privatization of nationalized industries, and the takeover of PDVSA, the state-owned oil industry that has been the source of great social developments in Venezuela since 1999.

As if aware of a pending coup, German embassy representative Jorg Polster issued a letter of warning on February 5 to German citizens residing in Venezuela, to take unusual precautions such as in the event of “political unrest like that which began in the spring of 2014.” The letter suggests the German nationals obtain a two-week supply of food, water and emergency provisions of battery, radio and important documents. The letter also indicates a loss of electricity and Internet access could be a possibility.

National Assembly president Diosdado Cabello and Jorge Rodriguez, mayor of the Libertador municipality of Caracas – both leaders of Maduro’s political high command – also appeared on television, denouncing Julio Borges, leader of the right-wing group, Primero Justicia (“Justice First” in English), as drafting the list of the 20-plus targets to be bombed.

An unfolding plot since January

A series of actions was planned by the counterrevolutionaries to lead up to February 12.

First step was economic destabilization through major corporate hoarding of goods to create empty stores and mass discontent. That has been taking place for weeks, with the right-wing then accusing the socialist government of economic failure.

The government countered with “Operation Dignity,” confiscating the hoarded goods for redistribution at fair prices to the population, and arresting the corporate conspirators.

The second step was internationally-generated false accusations of a “humanitarian crisis” in Venezuela by the U.S. and international allies of Washington.

It is thus no coincidence that on January 24, three right-wing former presidents of Latin American countries, Andres Pastrana of Colombia, Felipe Calderon of Mexico and Sebastian Pinera of Chile came to Venezuela and tried to visit jailed opposition leader Leopoldo Lopez. Afterwards, they demanded his freedom and held a press conference accusing Venezuela of human rights violations.

On February 3, President Maduro warned Washington to stop its interventionist meddling, and accused U.S. officials of trying to bribe current and former government leaders to betray the government.

Via Telesur, he denounced U.S. Vice President Joseph Biden’s recent meetings with various Latin American leaders, in which he told them Maduro’s government would soon fall, and that the Petrocaribe program would be ended. Biden advised them to “keep Venezuela isolated.” Petrocaribe is the Venezuelan program that provides oil to Caribbean nations at a low price.

Why was Telesur one of the targets to be bombed?

In 2002, when a fascist coup by a sector of the military and corporate opposition overthrew President Hugo Chavez from April 11 to 13, Venezuela’s revolution was new and a people’s media had not yet developed.

In the critical hours of the massive and spontaneous popular mobilization to demand Chavez’s release and return as president, the monopoly corporate media completely blocked out the news. It was clear that the Bolivarian process needed a revolutionary media to transmit vital information to the population.

Since then, dozens of community and television stations have been established; corporate violators of the new Communications Law have had their licenses revoked.

The Telesur network – promoting the integration of Latin America – was proposed 10 years ago by Chavez. It has become a vital conveyor of national and international information with a solid anti-imperialist prospective.

It provided uncensored live coverage and exposed the terror bombing by NATO/U.S. bombing of Libya.

Like the brutal bombing of Serbia’s national TV station, killing scores of journalists who courageously covered the criminal NATO/U.S. bombing of Yugoslavia in 1999, the planned bombing of Telesur was part of the plan to destroy the Revolution and install a fascist coup.

The smashing of this latest plot against Venezuela is a major blow to U.S. imperialism’s attempts to reverse the gains of the Bolivarian revolutionary process in Venezuela, the Cuban Revolution and all progress in Latin America.

Revolutionary mass organizations and the military high command are declaring their unity and defense of Venezuela’s Bolivarian Revolution.

Vladimir Padrino Lopez, the Minister of Defense and Strategic Operational Commander of the FANB, stood with a large group of high-ranking military officers to denounce the military plot. “The Bolivarian Armed Forces reiterates its support and loyalty to President Nicolás Maduro Moros and reaffirms its commitment to the will of the people, with the Plan of the Homeland, in the building of Socialism.”

More than ever, it is vital that international solidarity be mobilized to demand an end to U.S. machinations in Venezuela and all Latin America. Progressive groups and leaders in Latin America are expressing their support for Maduro’s government. From March 5-7, organizations in several cities in the United States plan actions in solidarity with the Venezuelan Bolivarian government and its people in struggle.

The danger is not over. The lessons of Latin America in the 1960s, 1970s and the U.S. war against revolutionary movements everywhere shows that the struggle must continue to defend Venezuela’s gains and oppose U.S. imperialism’s counter-revolutionary schemes.